The first four windows to be installed at St David’s, Mold. Photographs by Mike Bunting.

A six-year project to rescue, restore and relocate a set of 12 large church windows by Jonah Jones is nearing a successful conclusion.

The windows were made in 1967–68 for a Catholic church in Morfa Nefyn, on the Llŷn peninsula. Jonah used what was then a new experimental technique known as dalle de verre (meaning ‘slab of glass’), supported by a resin matrix rather than the traditional lead associated with stained glass. He also constructed a large mosaic for the church, which was closed for demolition in 2016, placing all of this large and important body of public artwork at risk of being lost.

Thankfully an imaginative decision by the Catholic Diocese of Wrexham to relocate the windows and mosaic saved them all from the same fate as the bricks and mortar. Their future home would be about 60 miles due northeast at St David’s Church, Mold.

First to be removed was the mosaic, which was restored and transported to a new school in Rhyl (for more about this, see the ‘A Resurrection’ link below). The windows were removed by a team from Scene & Word’s subcontractor, the Swansea College of Art’s Architectural Glass Centre (AGC), who worked with Scene & Word’s Alun Adams, formerly the coordinator of the AGC and an expert in restoring architectural glass.

Over the subsequent three years the 12 windows – each comprising two dalle de verre panels surmounted by a traditional leaded light – were painstakingly restored by Owen Luetchford and Stacey Poultney, the technical glass specialists at the AGC. They remedied structural faults in the resin matrices, caused by half a century of coastal Welsh weather combined with the massive weight of each panel, and removed and replaced any fractured dalles.

Earlier in 2022 the first batch of restored windows were delivered to St David’s. Four of them have since been mounted around the church in stainless steel frames manufactured by Dee Tech Services of Hawarden, under the direction of project manager Mike Bunting. A second batch of windows followed and the final batch will be delivered by the AGC at the beginning of July. It will include one panel whose structure failed catastrophically while the window was being removed from Morfa Nefyn, which is being reconstructed from new to exactly match the original panel. The framing and installation of all the remaining windows will continue over the coming months.

Scene & Word visit to the AGC

To mark the successful imminent conclusion of the restoration phase of this major conservation project, three of Scene & Word’s directors visited the AGC on 21st June 2022 to see the remaining work in progress and review the many techniques used during the restoration. They were given a crash course in cutting and handling architectural glass, applying fixing compound to a portion of the resin matrix, and fitting a replacement dalle into the exactly matching space created for it in the matrix.

All of these processes, some of which have been innovative and ground-breaking, have been recorded and documented as the work proceeded. They will eventually be gathered together and made available by the AGC for future study and for use in any future similar restoration projects.

The first pair of photographs show: 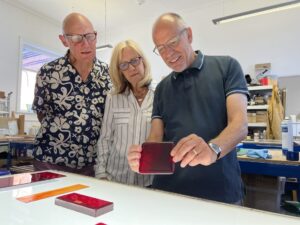 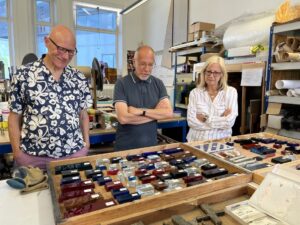 The next set of photographs show, from left to right: 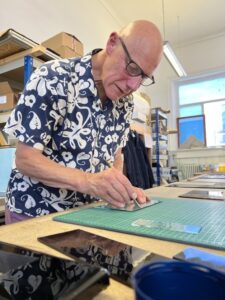 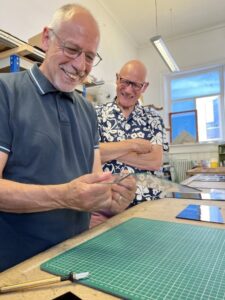 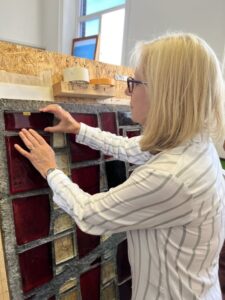 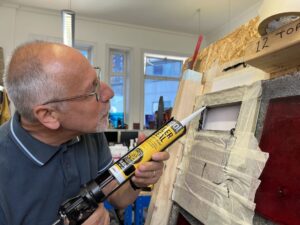 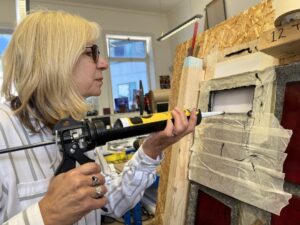 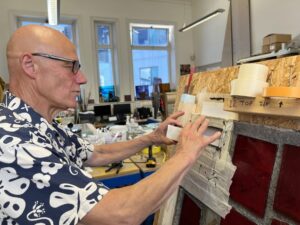 Look out for further reports here as this landmark project proceeds to its conclusion.

All photographs at the AGC by Owen Luetchford.