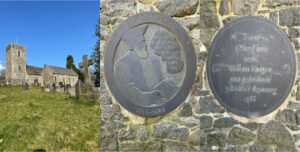 Jonah Jones briefly noted in his daily journal on 28th February 1988 that “it’s William Morgan’s anniversary, and there’s two jobs there.” Just over two months later, on 9th May, he added that he had “fixed Llanrhaeadr-ym-Mochnant plaques with some success.” The two roundels, which commemorate a critical juncture in the long struggle to keep the Welsh language alive, are still there.

William Morgan’s translation of the whole Bible into Welsh was published in 1588, when he was vicar at the handsome church of Llanrhaeadr-ym-Mochnant in north Montgomeryshire. In 1567 his father-in-law William Salesbury had published his Welsh New Testament, translated from the English text and using the English alphabet. William Morgan, who had studied Greek and Hebrew at Cambridge, was able to go back to the original manuscripts of the Old Testament, translating them directly into vernacular Welsh and using the proper Welsh alphabet. He also revised Salesbury’s New Testament in the same style to create a definitive version of the Bible, subtitled Y Beibl cyssegr-lan sef Yr Hen Destament, a’r Newydd. Revised in 1620, this became the standard Welsh Bible and is still in use today. It enabled the people of Wales to read the whole Bible in their own language instead of having to rely on English translations such as William Tyndale’s, which would have brought about a terminal decline in the use of Welsh in daily life.

Jonah made two roundels to mark the anniversary in 1988. The first has a portrait of William Morgan, with the first verse from John 1:1 in a vernacular Welsh script (“In the beginning was the word, and the Word was with God, and the Word was God”). The second roundel states that William Morgan was the vicar of the church in Llanrhaeadr when his translation was first published and is laid out in the characteristic lettering style of the Jonah Jones Workshop. A quick application of grey paint to the lettering, and a wipe with some raw linseed oil, would make it as good as new.