On 5 September 1947 in Haifa, Jonah Jones married Judith Grossman, the daughter of Jews from the Ukrainian city of Odesa. She herself was born in Dnipro, in central Ukraine. Shortly after her birth the family fled the country to escape the civil war in the collapsed Russian Empire – in other words, she began her life as a refugee like so many Ukrainians today. Eventually the family settled in Palestine, where Jonah and Judith met.

The Grossman family’s first language was Russian (the main language of Odesa), and they regarded themselves as Jews first and Russians second. Ukraine did not exist as a political entity before the First World War, and its short-lived postwar state had already lost most of its territory by the time Judith was born. Whatever the family’s sense of identity, they experienced the same upheaval of war as the people of Ukraine are now suffering. Just as families are being torn asunder now by fighting and exile, so Judith and many of her relatives were scattered about the world, never to come together again. The Second World War then took the lives of some of the family that remained in Ukraine. By the 1990s the only living close relative that Judith still had there was Vera Yakovna Spivak, the daughter of her aunt Roza Grossman. Vera, a music teacher and poet, lived from 1909 to 2005.

By its nature Scene & Word Ltd does not normally engage in political matters. However, there can be no art without life, and it is impossible to ignore the brutal assault on the lives of ordinary Ukrainians, which has already caused so much death and destruction. Art museums and galleries have had to be emptied of their contents to protect the country’s visual heritage; there have been reports of museums hit by Russian attacks which have resulted in the loss of priceless artworks. It seems fitting to mark this great tragedy with a poem by a woman from Ukraine with whom Jonah was connected by marriage – words that speak of the experience of so many Ukrainians in the last century and ours. 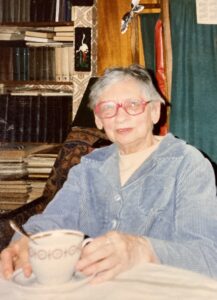 The only daughter of Judith Grossman Jones’ aunt Roza, Vera Yakovna Spivak, was born in Odesa in 1909. She was ten years older than her cousin whom she met only once, when Judith’s parents took their baby daughter to Odesa to say goodbye to the family before emigrating illegally in the face of revolution and chaos.

Vera and her parents were compulsorily evacuated to Tashkent during WW2 (probably her father worked for Kiev Polytechnic) and would have been equally compulsorily repatriated in 1945, to find that some members of their Jewish family had been murdered in Odesa during the war.

This poem, written in Russian in 1945, is untitled. (Because of the typographic limitations of WordPress, we have resorted to using / to separate the lines of each verse.)

Too many partings / Too many torn threads / For it not to seem / That the best days were in vain. / How many seeds of feelings / Failed to emerge / On the cold granite of parting / Despite abundant watering with tears.

We will remember past springs, / Love’s nascent trembling, / Blossoming friendships, / The magic fragrance of life.

Where are they? Only the wind of oblivion / Blows around their fragments. / It is the autumn of separation, / She said, without mercy, “Checkmate”.

How many meetings have never taken place / How many songs remain unsung / How many words, kisses / Have frozen on our lips.

The guillotine of parting / Beheaded the final word of greeting / And threw it into / The trampled ashes on the road.

Too many partings / So life seems a deception.

Too many partings / Too many unfulfilled dreams.