In July 2019 the transfer of Jonah Jones’ great mosaic of Christ the Holy Redeemer, from its original location in a church in Morfa Nefyn to the new Christ the Word Catholic School in Rhyl, was completed. 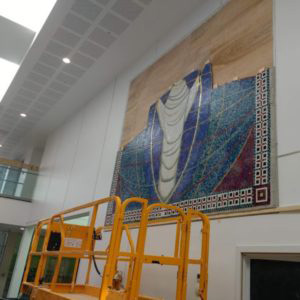 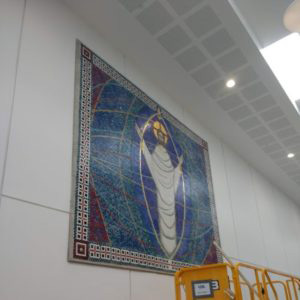 As Michael Rieveley, whose firm Rieveley Ceramics carried out the whole project on behalf of the Catholic Diocese of Wrexham, put it: “I consulted with colleagues and carried out extensive research but was unable to find any records of something of the same nature having ever been done previously.”

The story of how the project came about and was successfully delivered by Rieveley Ceramics is fascinating. It is also a valuable case study of the uniquely complex conservation and relocation of a mid-20th-century public artwork, half a century later.

Michael Rieveley’s account, which was originally published on the website of the Institute of Conservation (Icon), can be read at the following link: https://1drv.ms/b/s!Amq5aa8ReV7ahd9Ri8SYnmVHZtEFiw?e=PP98OR