Twelve large dalle de verre windows by Jonah Jones removed in 2019 from a closed church in Morfa Nefyn have been greenlit for restoration before being newly installed in the Catholic church of St David in Mold, Flintshire.

Dalle de verre (from the French for ‘glass slab’) refers to pieces of coloured glass, which are usually set in a supporting matrix of concrete and epoxy resin.

The restoration is being carried out at the Architectural Glass Centre (AGC) at the Swansea College of Art, which is part of the University of Wales Trinity St David. Each window consists of two panels and measures approximately 2.9 metres deep by 0.78 metre across, with each panel weighing approximately 100 kg. In addition, above each window there is a small leaded panel, or ‘light’.

At the time of writing, the general cleaning of the glass dalles has almost been completed. This process has involved the careful removal of a patina of dirt and dissolved solids from both faces of the dalles, resulting in a notable shine.

Work has started on rebonding dalles that have come completely free of the resin matrix supporting them. A greater challenge has been to replace missing dalles lost through gradual deterioration or petty vandalism over the years since the windows were first installed in Morfa Nefyn in the late 1960s. The AGC has developed and tested an innovative system of line-tracing the voids using vector-based software, enabling accurate waterjet-cutting of new replacement dalles. The method has proved successful and cost-effective, allowing the best possible fit without having to remove any material from the existing resin matrix. To fix the new dalles into the voids, several bonding agents have been tested, and the one selected has proven highly effective at sealing the glass to the resin.

Once the missing dalles have been replaced, the next stage will be to move on to stabilising other dalles that have fractured in situ but are otherwise intact.

The 12 leaded lights have been documented, with students assisting in taking accurate rubbings and in carefully dismantling the panels and cleaning the glass ready for releading. Where glasses are damaged beyond repair, replacement glasses have been obtained. The leading work will be done using a box of original 18mm Stillemans lead, arguably the best quality lead profile, which, although sadly out of production for several years now, has successfully been sourced by the AGC. 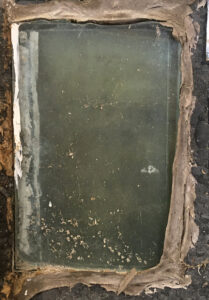 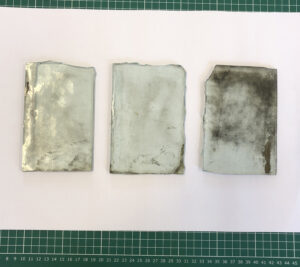 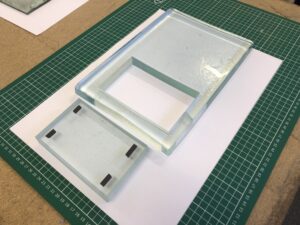 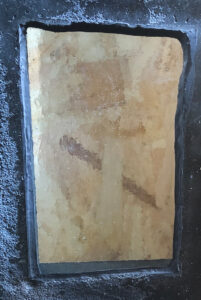 Four stages in a repair (from left): an original in situ repair done in Morfa Nefyn consisting of three layers of float glass; the repair glasses extracted from their matrix at the AGC; a new waterjet-cut dalle; and a replaced dalle reset in its matrix.