During the past few months three more forgotten works by Jonah have come to light through their owners contacting us via the Oriel Jonah Jones ‘Tell us about lost work’ link.

Colin Turnbull wrote to us about an unusual small abstract watercolour, signed by Jonah but undated, probably from the 1960s. In Jonah’s hand on the reverse is the title, Wrestling Jacob, and the work was originally acquired for ten guineas from the Tegfryn Gallery in Menai Bridge. Colin inherited it from his grandfather, an art teacher in Liverpool and a semi-professional artist, who had a holiday cottage in North Wales and, like Jonah in his younger years, was involved in Quakerism. Very possibly the two men knew one another. 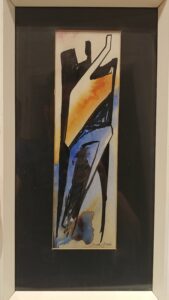 Later we heard from Louise Stanley about a small sculpture that is very clearly by Jonah. Carved in red sandstone, it is untitled, but we agreed with Louise’s reference to it as a “dancer”. The style and medium identify it as an early or mid-1950s work and a fine example of its period. Louise believes it was given to her family by Peter and Megan Jones, who were Jonah and Judith’s nearest neighbours and friends in Minffordd. 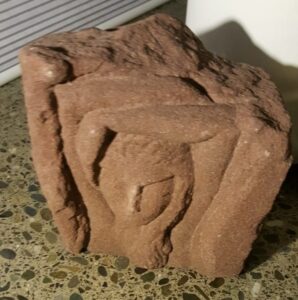 Most recently we were contacted by Richard Walwyn about a watercolour of a lily-strewn pond or small lake, which he believes is Llyn Tecwyn Isaf, a mile and a half from Jonah’s home in Minffordd. He acquired the work from a framer in Cardiff who told him he was given the painting “over twenty years ago”. Measuring about 12 inches wide by 22 inches high, Richard understands it dates from the late 1990s, although it may be earlier. 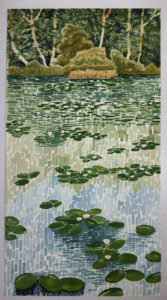 It is wonderful to come across these forgotten works and we are grateful to Colin, Louise and Richard for getting in touch and sending us photographs. We hope that many more ‘lost works’ will be brought to us in future.