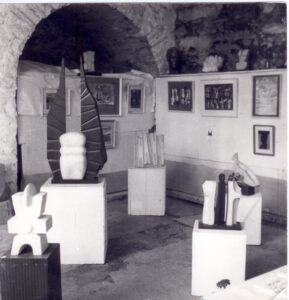 Scene & Word has uncovered what may be the only existing photograph of an exhibition of Jonah Jones’s work, which took place in his one-time workshop at Tremadog Market Hall in 1968 or 1969. He left no record of the show, but it may have been held as a kind of survey of his sculptural work during his eight-year sojourn in Tremadog, which he left around September 1968. This period was the most productive of his career, both for the series of large church commissions carried out in the 1960s, and the quantity and quality of his sculpture. The works shown in this photograph are (left to right): Marchog Gwyn (1968), Nike (1968), Lineout (c.1963–67), Mountain Queen (1965) and Lazarus (1968). In the background sketches by Jonah hang on the wall, and on the shelf above stand smaller sculptures and a bust of Sir Clough Williams-Ellis (1968), now housed in the Hercules Hall, Portmeirion.