North Walian Mike Lewis, who now lives in Banbury, recently used the ‘Tell us about Lost Work’ feature on Oriel Jonah Jones to bring a small sculpture by Jonah to our attention. It is a miniature version, about 20 cms high, of The Bathers, which was a classic example of his early work in carved stone. The larger version no longer exists and was probably destroyed, so this is a very welcome discovery.

A larger later work, Diceplayers, from 1955 has two figures in very similar poses but playing dice instead of ruminating after a commando-style dip.

This small version in Hornton stone was purchased by the Arts Council of Great Britain in 1953. 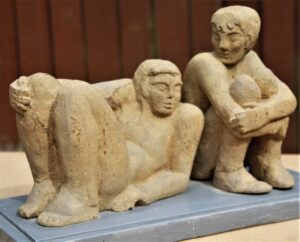