Using the Oriel Jonah Jones ‘Tell us about Lost Work’ facility, a former international rugby player has brought a long-forgotten sculpture by Jonah Jones to the attention of Scene & Word.

John Willcox was a pupil at Ratcliffe College, Leicestershire, from 1948–54. In 1959 Jonah was given his largest commission by Ratcliffe College. He was asked to fill an entire new chapel, as well as other parts of the school, with all kinds of art: “altar, organ grilles, candlesticks, statues, stained glass, all sorts of things,” as he later described it in Welsh Artists Talking (editor: Tony Curtis. Seren Books, Bridgend, 2000).

Willcox played rugby as fullback and represented England from 1961–64, including captaining his country. His club team was Harlequins and he also played in three test matches in the 1962 British Lions tour to South Africa. After retiring from playing he was for many years a teacher and the rugby coach at Ampleforth College where he coached Lawrence Dallaglio (England) and the brothers Simon and Guy Easterby (both Ireland).

The sculpture shows one player tackling another and was almost certainly commissioned by Father Claude Leetham, headmaster at Ratcliffe from 1948–62. Willcox remembers gifting an England shirt to the school in 1962 and thinks the gift of the sculpture was Leetham’s response to that. However, Jonah’s biographer Peter Jones reckons it was actually done after 1962: “I’d put it at 1963–64. [Willcox thinks it was possibly later still.] … Jonah was a very busy man throughout the 1960s, so evidently he carved it very quickly (he was a quick worker anyway) to oblige Claude Leetham, which is visible in the manner and finish of the work. … In any case this approach works very well for a piece that encapsulates speed and motion frozen at a split second in time.”

Another lost work by Jonah, a fine painting of Moel-y-Gest from Ystumllyn, on the western outskirts of the village of Pentrefelin where the Jones family lived from 1951–66, came to light a few weeks earlier when John Peredur Hughes, who as a child had lived next door to the Joneses, contacted Scene & Word about it. It was painted in 1954. 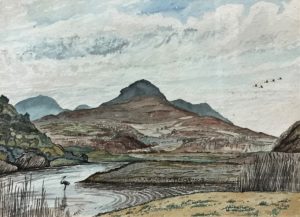 Another ‘lost work’ by Jonah Jones comes to light