A familiar photograph of Jonah Jones taken in 1997 in his studio at the Cartŵn Cymru office in Llandaff appears in a remarkable new book of photographs by Bernard Mitchell, Pieces of a Jigsaw, subtitled ‘Portraits of Artists and Writers of Wales’, published by Parthian Press. 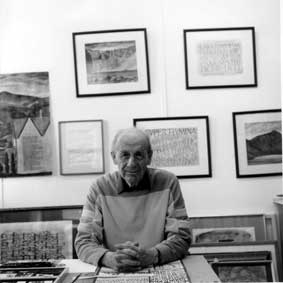 Another Mitchell photograph of Jonah with his whippet Leah taken during the same sitting appears on page 244 of the biography Jonah Jones: An Artist’s Life (Peter Jones. Seren Books, 2011).

The following text is taken from the Welsh Arts Archive on Bernard Mitchell’s website (bernardmitchell.co.uk/welsh-arts-archive/), where the photographs have been uploaded:

The Welsh Arts Archive is an ongoing project by photographer Bernard Mitchell to record a comprehensive list of notable characters within the Arts community in Wales.

Since 1990 I have added many artists who have since passed away, including Will Roberts, Josef Herman, John Petts, Ivor Roberts Jones, John Elwyn, David Tinker and Ernest Zobole. The work continues with the artists working today.