The large mosaic of Christ the Holy Redeemer, which once stood behind the altar in the Church of the Resurrection of Our Saviour, Morfa Nefyn (closed in 2016) has started a second life in a new school in Rhyl.

A firm of tiling experts, Rieveley Ceramics of Waunfawr, near Caernarfon, were commissioned by the Diocese of Wrexham to remove the mosaic, in small sections and all set in a bed of cement, as described and illustrated in an earlier article (see below).

While researching and planning for this demanding assignment, the firm’s director, Michael Rieveley, asked Scene & Word for any information about Jonah’s construction methods when he created the original mosaic in 1967-8. Jonah’s daughter Naomi, who was not yet in her teens at the time, remembered it all well and wrote to Michael as follows:

“Michael will know all of this I’m sure, but here’s how I observed my father making mosaics, just in case there’s anything useful I’ve recalled.

The final design was drawn out on brown paper (not sure if this was specialist paper or just thick brown wrapping paper) and then the design was cut into adjoining sections. At this stage the design was back to front.

The glass tiles (chamfered edges facing upwards) were glued into place on the brown paper in their sections, using what I think was a fairly general water-based glue (PVA?) that dried transparent. All the sections were completed this same way.

Next, each section was pasted over (across the chamfered side of the glass tiles themselves) with a white tile-cement grout-like adhesive and stuck in its place on the wall. All the sections were stuck on the wall in their places.

This all had to dry out completely. When it was totally dry, he soaked the brown paper with water and peeled it off. Some of the mosaic tiles would drop off at this stage, or come away with the brown paper, so these would be stuck back on with more of the white cement.

The final stage after all had dried again was to grout in-between the chamfered front of each individual tile by pasting more of the cement over each section, then wiping it off the tiles while leaving the grout in-between each tile.

I’ll say again, Michael will definitely know about all of this as it was a fairly standard mosaic-making procedure, so please don’t regard what I’ve written as any special technical knowledge!”

Having taken the mosaic down, Rieveley Ceramics then transported the whole thing to its new home, the Christ The Word Catholic School, which will take children from the age of 3 to 16 and will replace two existing schools that formerly were next door to the new site in Rhyl.

The photographs below (for which many thanks to Michael Rieveley) show the mosaic being put back together in Rhyl and then the finished thing, which has “just got some minor repairs and cleaning still to do”.

Scene & Word commends the Diocese of Wrexham for making all this come to pass. It would have been very easy just to take out the 12 dalle de verre windows from the church in Morfa Nefyn (which are a whole separate removal, restoration and relocation project: see below) and write the mosaic off as too difficult to handle. But the Diocese valued all the work equally. Their approach is an all too rare example of how to look after public art from the late twentieth century when many of the low-quality buildings of the era in which frequently it was housed reach the end of their natural life. Thanks too to David Hughes of Lawray Architects, Wrexham, for all his input into these projects. 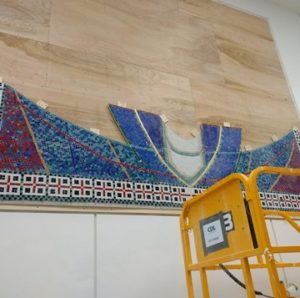 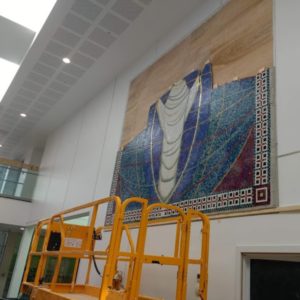 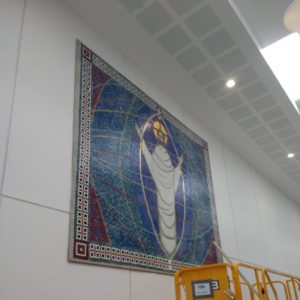 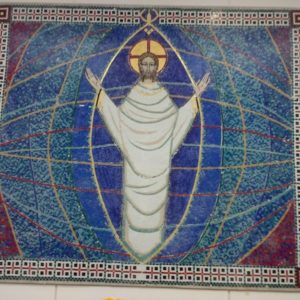