In recent years Swansea University’s Taliesin Arts Centre has gone through some major physical changes, which involved extensive building works on the lower floor. While the works were in progress, the large hexagonal Welsh slate plaque commemorating the opening of the arts centre, designed by Jonah and cut in the Jonah Jones Workshop in 1984 and which used to be near the lower-floor back entrance to the arts centre, was taken into storage.

Eventually everything returned to normal. But there was no sign of the plaque. Perturbed, Scene & Word wrote to Sybil Crouch, Head of Cultural Services at the Taliesin. Sybil was nearly at the end of a distinguished career, but before retiring she took it upon herself to find out the university’s intentions for the plaque.

Happily, the plaque subsequently reappeared in a new location adjacent to the box office entrance on the main arts centre floor. It looks in excellent condition and is far better lit and more prominent than it previously was on the lower floor.

A little later, a letter arrived from Steve Williams, the university’s Head of Libraries, Archives, Culture and Arts, confirming that ‘the plaque has now been rehung in the Taliesin Arts Centre … [in] a good location, but one that is still protected.’

We are very grateful to both Sybil and Steve for their successful efforts to ensure that one of Jonah’s very few pieces of public work in Wales’s second city has a long-term future. 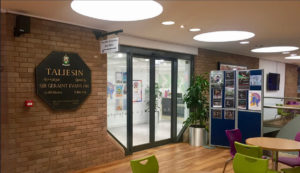