Closed in 2016, the Catholic Church of the Resurrection of Our Saviour contained a remarkable set of 12 dalle de verre windows by Jonah Jones and one of his finest mosaics, this one depicting Christ the Holy Redeemer.

The Diocese of Wrexham deserves praise for its enlightened approach to these irreplaceable assets. Unlike some other public owners who allowed work commissioned from Jonah Jones during the 1960s and 70s to be destroyed a few short decades later because of refurbishment or demolition, the Diocese, advised by David Hughes for Lawray Architects, Wrexham, has decided to engage experts to remove, restore and relocate the windows and mosaic elsewhere in the Diocese.

At the time of writing, work was well in hand for the removal of the mosaic by Rieveley Ceramics of Waunfawr, near Caernarfon, as these photographs they kindly sent us showed: 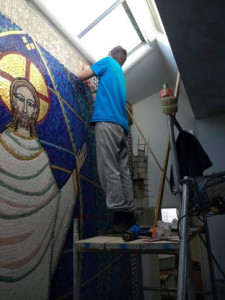 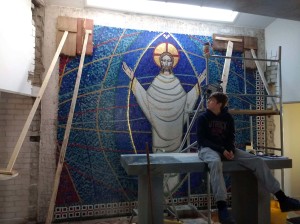 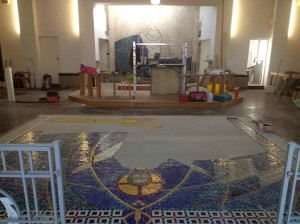 For the windows, the Diocese contracted Scene & Word due to the expertise of Alun Adams, one of our directors and formerly the co-ordinator of the Architectural Glass Centre (AGC) at the Swansea College of Art. Having surveyed and evaluated the church and windows and drawn up a plan of action, Alun arranged for the work to be subcontracted to a team from the AGC under the direction of Owen Luetchford, assisted by Stacey Poultney.

Two of the windows were taken out in early January to be loaned to Oriel Plas Glyn-y-Weddw, Llanbedrog, for the seven-week duration of the centennial exhibition there, for which the gallery chose one as a centrepiece of the show. The removal of the remaining ten windows was completed by the AGC team in March. All twelve windows are currently in safe storage awaiting restorative work and relocation to their new home in north-east Wales: see the AGC’s photograph below. The removal of the mosaic by Rieveley Ceramics was also safely accomplished. It too will eventually be relocated in north-east Wales. 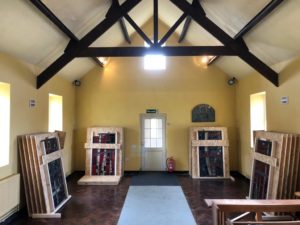