Fr Matthew Power SJ, the former Superior of the old Jesuit retreat centre at Loyola Hall, in Rainhill on Merseyside, has informed Scene & Word Ltd that some of Jonah Jones’s work in the chapel there has been relocated by the Jesuit Province.

Following the closure of Loyola Hall in 2014 [see the link to the ‘Jesuit retreat centre with Jonah Jones artwork to close’ story, published in August 2013, below], the large rood cross has been incorporated into a new chapel in the village of Hurst Green, Lancashire, which has been a Jesuit parish for many years [click here for link to image of the rood cross on Wikipedia].

The Stations of the Cross have gone to St Beuno’s, the Jesuit retreat centre at Tremeirchion in North Wales. At the time of writing they have still to be mounted.

Loyola Hall itself was sold in 2017 to Signature Living. Fr Matthew understands that they are keen to retain Jonah Jones’s stained glass [example below]: 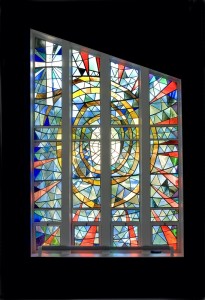 The Hall will be used as a marriage venue, amongst other things.