Mumbles, the seaside village on the Gower edge of Swansea, has been twinned with Hennebont, a historic town of some 15,000 people in southern Brittany, since 2004 and the two communities have developed strong links and close friendships. In June 2017 a party from Mumbles Community Council (MCC) and the Twinning Association of Mumbles made an official visit to Hennebont. On 22nd June gifts were exchanged between André Hartereau, the mayor of Hennebont, and Pamela Erasmus, the vice-chair of MCC, on behalf of the two communities.

For Mumbles’ gift to Hennebont, MCC purchased two items from Scene & Word’s An Artist’s Life in Wales limited-edition collectors’ set: the book Jonah Jones: the Gregynog Journals and one of the three prints, Llyn Caseg Fraith and Tryfan / Llyn Cau and Cader Idris, which was originally painted by Jonah in 2001. 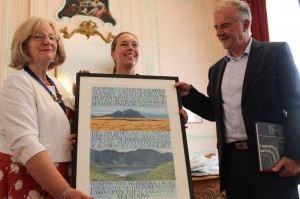 Article on ‘The Gregynog Journals’ in ‘Parenthesis’