The four large windows made by Jonah Jones for the Catholic Church of the English Martyrs at Hillmorton, in Rugby, Warwickshire, have been dismantled and the glasswork has now been lost for the future.

Jonah made the dalle de verre (slab glass) windows during 1965–66. Each was 30 ft wide and up to 12 ft high at its apex – the largest such windows Jonah made. (A section of one of the windows adorns the foot of this website’s home page, while further images can be seen here: click the JONAH JONES IMAGE GALLERIES link, then the STAINED GLASS section, and find images 25–29.) The windows were part of the series of collaborative projects between Jonah and the architect E. Bower Norris, and were based on the theme of the crown of thorns.

The dalle de verre technique was in its infancy during the 1960s, and unfortunately the structural matrix for the windows proved to be inadequate. The flimsy concrete transoms provided insufficient support for the window panels, and were very poorly bonded at the sides. This was an architectural fault. As a result the lower panels were liable to be crushed by the weight of those above, and when the first transom broke loose it brought the panel above it down. 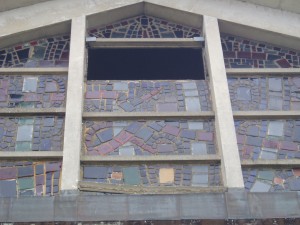 Before the windows were removed, this shows the smooth surfaces and ends of the loose transom, which had fallen onto the outer ledge below the window. The panel above it had fallen into the church!

The south and west windows became unsafe, although the other two windows remained sound. The parish consultative council ultimately took the decision to remove all the windows, which took place over the course of 2012. The glass panels were then stacked in the wrong way (in horizontal layers instead of vertically) on the ground adjacent to the church, resulting in such extensive damage that the artwork is now beyond repair or re-use. 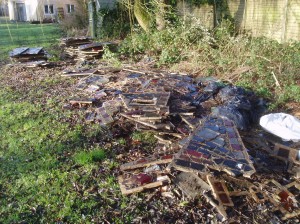 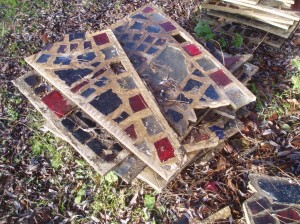 Aidan McRae Thomson, a stained glass artist who attended English Martyrs Church for many years, described Jonah’s windows as “something that inspired and fascinated me from an early age”. He campaigned unavailingly for the windows to be saved, and Scene & Word Ltd is grateful to him for his efforts and for the frankly tragic photographs, shown above, which he supplied of the dismantled glass panels. Scene & Word would also like to thank Fr Malcolm Glaze, the former parish priest, another advocate for the windows, who made it possible for them to be recorded before they were removed.