A party was held at the Kooywood Gallery in Cardiff on 3 February to launch Jonah Jones: an Artist’s Life and Jonah Jones: The Gregynog Journals.

In a speech to the guests Peter Jones emphasised the need to conserve and protect Jonah Jones’s remaining public works. Reminding the audience of the many pieces that have already been lost, he said that the survival of Jonah’s work should never be taken for granted. A constant effort would be necessary to save his sculptures, church glass and mosaics for the future. Peter urged everyone who valued Jonah’s legacy to join Scene & Word in safeguarding the works and locating the funds needed to do this. 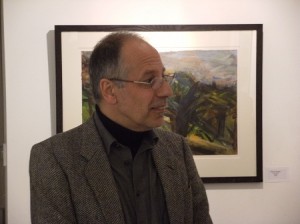 Peter Jones speaking at the launch of his biography of Jonah Jones. Photograph: M Felton

Several of Jonah’s painted texts were on show at the launch, together with a display spotlighting the threat to Jonah’s work.

Scene & Word would like to thank Mick Felton of Seren Books for arranging the launch and Neil and Rhian Jones of the Kooywood Gallery for hosting the event.

The three prints of painted texts by Jonah Jones published by Scene & Word can also be bought in the Kooywood Gallery, at 8 Museum Place, Cardiff CF10 3BG, as well as direct from Scene & Word (click here for more details).

Article on ‘The Gregynog Journals’ in ‘Parenthesis’