Jonah’s wall sculptures Justice and Mercy are at the centre of a complete refurbishment recently completed at Mold Law Courts, Flintshire. As part of the project the sculptures were repaired and the walls returned to their original duck egg blue colour as seen in slides taken by Jonah immediately after the works were erected.

Made in 1968–69, Justice and Mercy represented a major change of direction in Jonah’s public work to more abstract forms, though retaining clear symbolism. Together they made up his first wall sculpture. Her Majesty’s Courts Service is to be congratulated for showing such respect and appreciation for this extremely important piece of work by Jonah and ensuring its preservation. 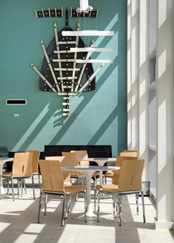 The principle contractor for the work was R.L. Davies while the project was managed by White Young Green of Cardiff on behalf of HMCS. The Mold Law Courts will be officially reopened on 7 May 2010.

Thanks to Paul Taylor of White Young Green for information on the refurbishment.