Because Jonah did not keep a full log of all his artwork as he carried it out, many of his creations have slipped into relative obscurity and in effect await rediscovery. Tracing pieces by Jonah can be like detective work, drawing on references in letters or journals, fuzzy photographs and press cuttings, memories of relations or friends, and internet items. 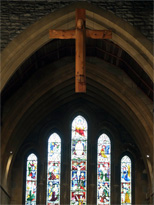 Two examples of this have recently brought public commissions carried out by Jonah in West Wales to the attention of Scene & Word Ltd. We were aware of the fine wooden rood cross of Christus Rex at the Church of All Saints in Llanelli (Church in Wales), but its story was surrounded by a degree of mystery. After some investigation we found that it had originally been carved in 1979 for the Church of St Seiriol in Holyhead, having been commissioned by a family to commemorate the untimely death of a son. When the family moved to Llanelli in the early 1980s they brought the cross with them and had it installed at All Saints. (St Seirol’s closed in 1989 and was demolished three years later.) Besides this, Jonah’s journal for 1983 mentioned in passing carving a rood cross for Llanelli. Canon D.T. Davies of St Albans Church admired the first rood cross so much that he commissioned another, which still hangs in St Albans. Our thanks go to the Rev Ian Thomas, formerly rector of All Saints, and Mrs Elizabeth Davies, parishioner at St Albans, for helping us trace the history of these fine crosses.

Jonah also recorded in his journal carrying out the Spolasco carvings for the Swansea Maritime Quarter in spring 1989, together with Meic Watts, who was then learning his trade with Jonah (Meic is now well established as a fine carver and sculptor himself). The carvings, which adorn either side of Patagonia Walk off Trawler Road, recall the Italian quack doctor “Baron” Spolasco, who became a renowned character in the South Wales of the 1830s.